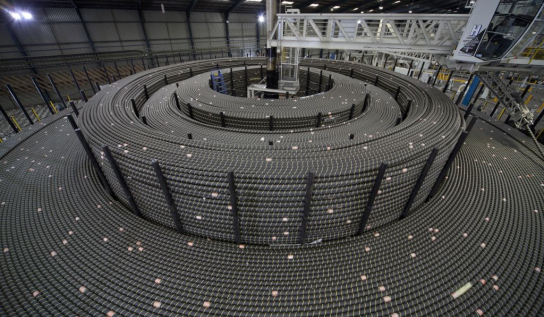 Bartlomiej Zgryzek, vice president at TELE-FONIKA Kable SA and board director at JDR Cable Systems, talks to the BPCC's Michael Dembinski about the company's prospects in the world of green transformation.

TFK Group, a family corporation for 30 years, has taken up the challenges of competition in various areas of the energy sector and its international supply chain. Both JDR and TFKable are active participants in the green revolution that is taking place in the development of offshore wind energy.

TELE-FONIKA Kable began operations on 7 April 1992. By 1996, TFKable had achieved a leading position in the fibre optic and computer cables segment. In 1998, the company adopted a business model that assumed entering new, attractive, and developing market segments, also considering geographic diversification. In 2003 Polish and foreign assets were consolidated. In 2008 TFKable started cooperation with JDR Cables Systems in the supply of advanced submarine cable systems for Greater Gabbard offshore farm projects in the UK, followed by cable supplied to the London Array in 2011 and Nordsee One in Germany in 2015.

With growing demand for high-voltage (HV) and extra-high-voltage (EHV) cable, in 2010 the company made the decision to launch a significant R&D project, increasing the technological and production capacity of the HV and EHV cable group within the company.

"In 2017, it became natural for us to strengthen further our cooperation with JDR, which resulted in JDR joining with the Polish cable family. From the very beginning at TFK Group, we have supported the construction and operation of offshore wind farms worldwide. Our common journey in offshore wind energy started in 2008 and has seen us being awarded our 50th wind farm project this year. At present, regardless of the current trends and challenges, the core priority of TFK Group is sustainable growth based on introducing eco-friendly green technologies." says Mr Zgryzek. This year, JDR has initiated a new investment.

A third UK factory is to be built, in Cambois, near Blyth, 13 miles north of Newcastle-upon-Tyne, on a 16-hectare site, once home to a coal-fired power station. It will be built with assistance from the UK government's Offshore Wind Manufacturing Scheme (OWMIS). In April 2022, UK Export Finance agreed on an investment grant for the £130m factory. "Production is expected to begin by the third quarter of 2024," says Mr Zgryzek.

The state-of-the-art subsea cable manufacturing facility in Cambois, near Blyth, Northumberland, will manufacture subsea cables long enough, large enough, and sufficiently durable to export power from wind farms situated much further from shore. "The new factory will be dedicated to renewable energy sources. Our target markets are not only the UK and in Europe, but also global including windfarms off the West Coast of the USA or Taiwan. In the US, we currently have our Houston Service Centre in Tomball, Texas, providing engineering support for energy projects in the Gulf of Mexico, as well as offshore commissioning, testing, and repair work.  From this strong base we are increasing our support for the rapidly growing US offshore wind market." says Mr Zgryzek.

The UK deal was arrived at with help from HSBC, Société Générale and BGK in Poland and from British government institutions – the Department for Business, Energy & Industrial Strategy (BEIS), the Department for International Trade (DIT), and the Export Development Guarantee Department of UK Export Finance. "All permissions and certifications were in place in 2018, but the pandemic delayed vital milestones. The government has been taking this project seriously - it fits in with the ambitious UK Energy Security Strategy for helping reduce reliance on oil and gas and bringing cleaner, green power to the UK," says Mr Zgryzek. The project will create 171 local jobs while safeguarding 270 jobs at our existing UK facilities.

Poland's offshore wind project is also of great importance to TFK Group. "We are present as a subcontractor with selected supplier agreements signed with the consortia bidding for Baltic Wind project work." Wherever a project is located, TFK Group understands the nature of offshore wind very well. "Only 5% of the total investment cost is the cables, but without cables to export the energy generated by the turbines from sea to dry land, the entire project is useless," says Mr Zgryzek. The importance of quality cannot be overstated.

According to the report Pathway to 2030, A Holistic Network Design to Support Offshore Wind Deployment for Net Zero, published by National Grid ESO in July 2022, the UK currently has 15GW of offshore wind capacity at present, with a further 50GW planned to 2030. Meanwhile, the Polish Wind Energy Association in its report The Potential of Polish Wind Energy, published last month, indicates that Poland's Baltic Wind potential capacity is estimated at 33GW. There are projects currently listed on the market at 4.7GW. "We have the engineering know-how and the R&D team in Bydgoszcz; we have the experience and the competitiveness. Transparency and security are vital in the supply chain."

Although TFK Group's sales strategy is strictly business-to-business; the group is well known in local markets for its continuous supplies to electricity distribution network operators and distributors of electrical goods, says Mr Zgryzek. "However, we are very well known in the industry, particularly offshore. Our approach is a continuous continuation of development in many markets, including financial ones, especially through investments". JDR has also announced a £3m investment into its existing facility at Hartlepool, installing new machinery with double the weight capacity, boosting Hartlepool's production capacity by approximately 25% so that it can manufacture 132kV and 150kV array cables alongside its current 66 kV product range.